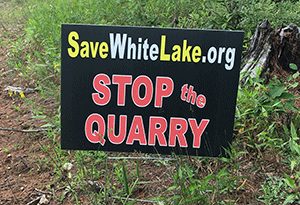 By Ralph A. Cossa

In his January 11 commentary in the Adirondack Almanack, Peter Bauer posed the question “Will the new boss be the same as the old boss?” wondering if the Adirondack Park Agency Board of Directors, under new Chairman John Ernst, would finally begin to hold arbitration hearings regarding contentious issues, or would they continue to avoid this process that allows to hear the opinions of citizens and experts and to answer questions. The issue in question was White Lake Quarry’s application (APA2021-0075) which called for extensive mining operations directly above the community’s aquifer and within 1,000 feet of their pristine spring-fed lake, at the middle of a residential community with a tourist vocation of some 400 homes and small businesses.

Arbitration hearings were once commonplace; between 1973 and 2008, there were 151, or about 4 to 5 per year. Since 2008, not a single arbitration hearing has taken place as the APA has become increasingly inclined, especially during the Cuomo era, to support commercial activities in the park it has sworn to protect. . Governor Hochul is committed to changing this mindset. Obviously, word hasn’t gotten to the APA yet.

I personally and directly (via email) pleaded with APA President John Ernst to ask staff a simple question during his Thursday and Friday (January 13-14) review of the application. of White Lake Quarry: “Have the criteria for an arbitration hearing been met?” (We believe and have documented to the APA that six out of seven criteria for an arbitration hearing have been met; only one is required to justify a hearing.) Instead, during the meeting, the president focused on how they could justify avoiding a hearing.

The APA may have had the right to bypass a hearing, but it was definitely not the right thing to do in this case.

The Adirondack White Lack Association (AWLA, of which I am a member and my wife the president) provided expert testimony arguing that the scientific data and controlled tests necessary to demonstrate that the proposed mining will not adversely affect our lake and our community are absent or incomplete. Instead of being granted a hearing, we were dismissed as “confused and misinformed”. A formal public arbitration hearing – a quasi-judicial proceeding administered by an administrative law judge from the Department of Environmental Conservation (DEC) – would have allowed our claims to be independently assessed; it would also have enabled us to cross-examine the applicant’s experts and the staff of the APA. The AWLA, along with Protect the Adirondacks, the Adirondack Council, the Sierra Club and a number of other local organizations, formally requested an arbitration hearing after providing documents confirming that the criteria for such a hearing had clearly been fulfilled. But the APA board instead voted to approve the request without a (fully justified) hearing.

Why was our request ignored? Only the APA can say for sure. A cynic might think it was because the APA didn’t want to spend the time and expense of a hearing where it would be required to answer questions and defend its findings. A greater cynic might think that the APA realized it should never have marked the application complete in the first place and wanted to avoid being questioned under oath about its initial error and failure to right the wrong. Whatever the reason, the end result is the same: conflicting evidence will not be heard and judged in a neutral setting and the community’s need for answers will not be met.

Again, business as usual at the APA. Commercial interests have prevailed, while the interests of the surrounding community are ignored. We (foolishly) expected better from Governor Hochul and President Ernst. We should have known better. When a member of the White Lake community called the APA last spring to complain about the application that had just been submitted, he was told not to worry about it because it was “a done deal. “. We didn’t want to believe it, but it turned out to be true.

Ralph Cossa is a retired USAF Colonel who spends May through October at White Lake in the Adirondacks Park. His wife, whose family has resided on the lake since the 1950s, is president of the Adirondack White Lake Association.

View all posts by →