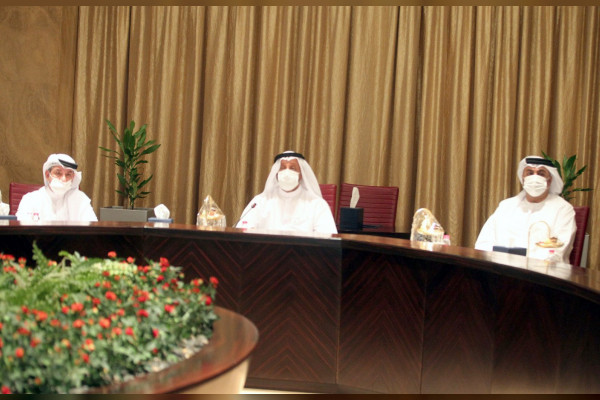 SHARJAH, July 10, 2021 (WAM) – The Sharjah Chamber of Commerce and Industry (SCCI) hailed the wise approach and vision of His Highness Dr Sheikh Sultan bin Muhammad Al Qasimi, member of the Supreme and Sovereign Council of Sharjah, which has helped boost the resilience and adaptability of Sharjah’s economy, as well as improving its stability and growth, by providing a secure, stable and attractive business environment which has strengthened Sharjah’s position on the world economic map.

This happened during the 17th periodic meeting of the Board of Directors of CSIC, which was held at the seat of the House and was chaired by Abdullah Sultan Al Owais, President of CSIC, in the presence of Sheikh Majid bin Faisal Al Qasimi, First Vice-President of CSIC. ; members of the board of directors; Mohammed Ahmed Amin Al Awadi, Director General of the Chamber; Maryam Saif Al Shamsi, Assistant Director-General, Support Services Sector; and Abdulaziz Shattaf, deputy general manager of the member services sector and director of the Sharjah Export Development Center (SEDC).

The meeting also reviewed the half-yearly strategic plan for 2021, which includes a number of goals, primarily focused on revitalizing and supporting the business sector to improve its ability to meet current challenges.

Discussions also focused on a number of future projects that CSIC intends to launch, in addition to highlighting Sharjah’s summer promotions, which began on July 9 and are expected to run through July 26. August 2021. In addition, the meeting discussed the final preparations for the 5th edition of Al Dhaid Dates Festival, which will take place at Expo Center Al Dhaid, July 22-25.

Al Owais praised the tremendous efforts of the sharp leadership of the Emirate of Sharjah and its forward-looking vision, as well as the distinguished economic climate it provided to support the business lines and strengthen the development process of the emirate.

The Board of Directors of the CSIC underlined its commitment to consolidate the effectiveness of the institutional performance of the Chamber and its tireless work to preserve all the gains made during the past period, reaffirming its determination to adopt international best practices. that maintain the leadership and position of the private sector in the emirate, as well as strengthen the emirate’s position as a regional and global business destination.