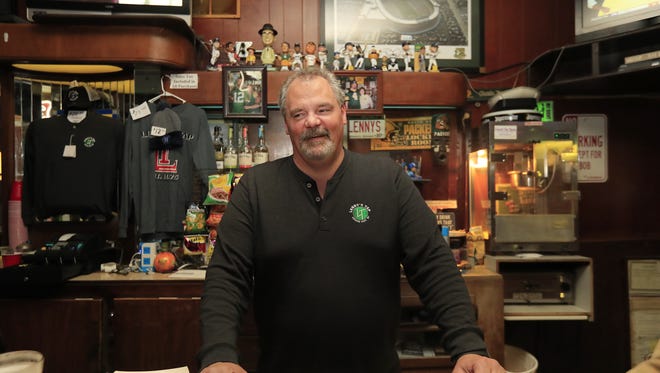 The classic 431 N. Broadway neighborhood tavern was a big hit when ESPN senior writer Wright Thompson and a video crew showed up last week to film a segment of “Sunday NFL Countdown” for Week 1 of the NFL season. The 3-minute play examines Green Bay’s deep connection to the Packers and his complicated relationship with quarterback Aaron Rodgers after a tumultuous offseason.

It begins from Thompson: “Last week I was sitting on a stool at Lenny’s Tap, that big beer and shot bar on North Broadway in Green Bay, when the bartender looked up and said, ‘With this open door, you can feel it falling in the air. Thank God. Summer has been strange here. You saw the press conference.

The late Wally’s Spot Supper Club sign, St. Willebrord Catholic Church, the Packer Stadium Lounge, Lambeau Field, the Packers Hall of Fame and even the biggest nut in the world outside of Packer Fastener get seats in the play aired Sunday, but the 46-year-old Lenny’s Tap is the undeniable star.

It’s also the national television debut for owner Marty Leonhard, who regulars (and Leonhard himself) will tell you he’s not shy.

“Somehow I’m pretty good at giving a little bs, you know.” I can talk to anyone about anything, â€said Leonhard. “But this guy was really cool.”

RELATED: At Lenny’s Tap, it’s the banter behind the bar, Old Style for over 40 years

Thompson told him he knew Lenny’s Tap from his previous visits to the Green Bay game for the Packers. He and his team filmed on September 7, but traveled back and forth much of the week.

Leonhard and some of the regulars made sure their visitors’ food and drink needs were covered. They served sausages from Konop Meats Inc. and cheese from Krohn Dairy Products, both in Stangelville, after the shoot.

â€œWe have horseradish that’s right next to killing you. He must have tried this, of course, and thought it was extremely hot, â€Leonhard said. “So you might as well take out the hot pepper cheese, and he tried a little bit of it.” They had a great time. ”

What Thompson called “the greatest rum cake I’ve ever had” in an Instagram post from the broadcast was the work of one of Lenny’s Tap regulars who comes with her husband, a former bartender from Lenny’s, for the Packers game and other special events, always with a rum cake or two in hand.

To top it off, it was the house specialty: Old Style beer. You didn’t have to twist your arm for out-of-town visitors to showcase the local tradition. They told Leonhard that whenever they went to smaller towns in Wisconsin or Illinois, they looked for the old style.

The response to the ESPN article was “very good things … all positive,” said Leonhard. He overheard people from out of town sitting at the bar at Lenny’s at one point or another. His relatives across the country saw the segment before Leonhard. He was out hunting his dog when it first aired.

The attention is a welcome boost for the family bar which, like so many other local establishments, has been on a bumpy road since the pandemic. Business hasn’t returned to normal, Leonhard said, but it’s getting there. Football will help.

He suspects he’ll have to somehow commemorate the ESPN moment by adding to a rear bar collection that includes Wisconsin sports figures, photographs, signs and other memorabilia. But for now, everyone who has appeared in the segment is more than happy to talk about it.

â€œThe people who were here are all acting like they’re movie stars now,â€ he said.