Idea sharing can get messy when co-workers don’t understand or support new concepts — or if they shut them down altogether. Sabrina Habib, professor of visual communication, writes for The conversation on concrete ways to facilitate the generation of ideas, both individually and in groups.

Creativity is one of the most in-demand skills in the workplace.

It’s no surprise that large multinational corporations seek to hire inventive thinkers: research shows that creativity can drive innovation and resilience in organizations.

Tech giant Google has grown by innovating the way we all use the internet. Electric car maker Tesla touts a collaborative work environment to “solve the world’s most important problems with talented individuals”.

Yet the sharing of ideas can get messy when colleagues don’t understand or support new concepts — or if they shut them down. Research offers concrete ways to facilitate the generation of ideas, both individually and in groups. But first, it helps to know what you’re trying to facilitate.

So what do employers mean when they talk about creativity?

Creativity has many definitions. Most mention originality and problem solving.

Renowned psychologist Mihaly Csíkszentmihályi perhaps said it best when he characterized creativity in the workplace as having an idea that is recognized by other experts in the field and the general public as something new.

In my research, I explore the creative process in the context of higher education, advertising and leadership.

In 2019 I created a course at the University of South Carolina called Creative Thinking & Problem Solving to help students thrive in the workplace where most problems won’t have an exact answer and they will not have study guides or teacher commentaries. I have observed that after a lifetime of filling in bubbles on multiple-choice tests, some students can find it intimidating to work in gray areas where any solution seems possible.

And yet, after graduation, most of my students will look at job descriptions that mention creativity, one of the most in-demand soft skills.

The tendency of companies to solve problems in groups goes back about eight decades. Advertising executive and business guru Alex Osborn coined the term “brainstorm,” which he described in his 1948 book “Your Creative Power” as “the use of the brain to storm a creative problem— and do it like a commando, with each stormer attacking the same goal.” His goal was quantity: 10 of his employees once produced 87 ideas for an ad campaign in just 90 minutes.

Although team brainstorming can help colleagues bond, debate, and exchange ideas, its effectiveness has been questioned by researchers in recent years. Many organizations continue to use the process. Public recognition of their ideas puts people in the spotlight, making them vulnerable to criticism. A lack of confidence can also challenge creative thinking.

Many resources have emerged offering strategies to build individual creative confidence. These include accepting failure, playing games, and overcoming the fear of being judged.

The challenge of team brainstorming

Because individuals view problems from different perspectives, research shows that groups with diverse disciplines, backgrounds, beliefs, knowledge, and skills produce the strongest and most unique results. Brainstorming between people with different types of expertise holds individuals accountable for contributing suggestions from their specific area. 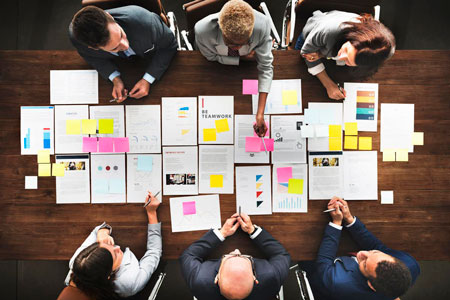 There are many ways to organize productive “group brainstorming” sessions, but established guidelines and goals are essential. Rawpixel/iStock via Getty Images.

Successful group work requires concentration. My research shows that it is important to properly define the challenge, task or problem. This includes collecting key data and defining boundaries, such as timeframe, budget, available resources, technology, and any other constraints. This launch helps a team select the best idea generated by their collaboration.

Nurturing group creativity requires an environment that encourages risk-taking, constructive criticism and teamwork. Creating a culture conducive to creativity must be done intentionally in a way that counters personal fears of rejection and tendencies towards self-censorship or criticism. People should be empowered to express themselves.

It is essential to establish three key guidelines:

Brainstorming sessions can be more productive if participants do some independent work first.

In a group, this can be done simultaneously over minutes or even days, with team members writing down their ideas individually and then sharing with the group later. This process, known as divergent thinking, can also be done virtually through collaborative websites such as miro, mural, and figma. Working individually ensures everyone will contribute ideas and everyone’s voice will be heard.

Next comes “convergent thinking”. The group evaluates the proposals to identify the best innovation or solution to the problem to be solved. Building on someone else’s idea is encouraged.

There are many other approaches to group brainstorming, such as “design thinking,” in which quick brainstorming sessions lead to tangible prototypes. The “six thinking hats” method allows group members to focus on each aspect of the proposed idea at a time. For example, they will discuss negative, then positive aspects, feelings, risks and possibilities for each solution.

Although brainstorming can sometimes be an arduous process, it promotes buy-in to ideas and team cohesion. And it is important to remember that in a space where everyone feels free to express themselves, good ideas can come from anyone.

This article is republished from The Conversation under a Creative Commons license. Read the original article.

Share this story! Let your friends on your social network know what you’re reading