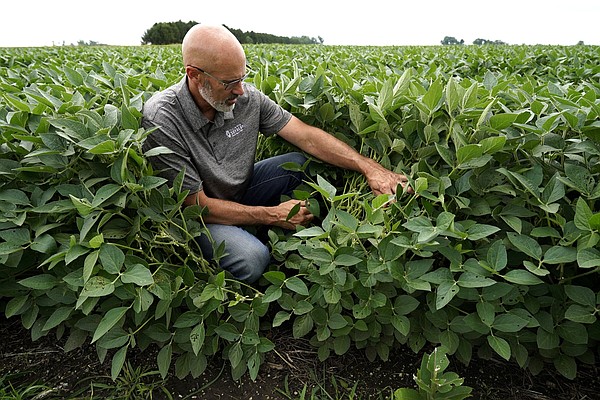 It’s time to double the harvest, says the agency

DES MOINES, Iowa — There’s not a lot of farmland in the United States, so when Russia’s invasion of Ukraine last spring raised fears people were going hungry while the wheat remained stuck in blocked ports, American farmers could do little to meet the new demand.

Earlier this summer, the U.S. Department of Agriculture instituted new policies to encourage U.S. farmers to start growing two crops on the same piece of land, one after the other, a practice known as double cropping. .

By changing insurance rules to reduce the risk of growing two crops, the USDA hopes to dramatically increase the amount of wheat American farmers could grow each year, reducing reliance on large wheat producers like l Ukraine and Russia and eliminating bottlenecks.

The idea is an intriguing development stemming from the war in Ukraine that hasn’t received widespread attention. As fall approaches, it’s unclear how many farmers will actually try the new system, but some who are already growing two crops say it’s something farmers should consider.

“I think it’s a great idea,” said Jeff O’Connor, an Illinois farmer who has practiced double cropping for years and hosted President Joe Biden at an event in May to promote the efforts to increase food production. “How successful it will be, I don’t know.”

Even if the effort is only moderately successful, it could benefit agricultural groups looking for new ways to meet growing global demand for food while generating more profits for farmers facing high fertilizer and fuel costs. . As Andrew Larson of the Illinois Soybean Association said, “It removes some of the barriers and provides a lot more flexibility.”

In 2020, the United States exported $6.3 billion worth of wheat. The United States, along with Russia, Australia and Canada, generally leads the world’s wheat export rankings, with Ukraine generally ranking fifth, although its shipments will drop this year due to the war. .

Double cropping is not new to parts of the South and South Midwest, which have the key advantage of longer growing seasons. These warmer temperatures allow farmers to sow a crop in the fall – usually winter wheat – that is dormant over the winter, then sprouts and can be harvested in late spring, just as farmers plant a second crop – usually soybeans.

The problem arises when cool weather delays the spring wheat harvest, which in turn delays soybean planting. And that’s where the USDA’s new effort could mitigate the risk of a costly plantation safeguard.

The USDA’s risk management agency will streamline crop insurance approvals for farmers planting a second crop in more than 1,500 counties where double cropping appears viable. The agency will also work with crop insurers and farmer groups to promote greater availability of coverage in other counties.

In announcing its efforts, the USDA said it aims to “stabilize food prices and feed Americans and the world amid persistent challenges such as the COVID-19 pandemic, supply chain disruptions supplies and the invasion of Ukraine by Russia”.

The USDA didn’t mention climate change, but the agency and other experts have long said warming temperatures will cause farmers to rethink what and how they grow.

The new program is more focused on the Russian invasion of Ukraine, which is one of the main suppliers of wheat to people in Africa and the Middle East. After the invasion, wheat prices almost doubled to more than $12 a bushel, though since then prices have steadily fallen as supply problems eased, in part due to agreements which allowed the export of part of the country’s wheat.

The USDA did not respond to a request for details on how many farmers the agency says will begin double cropping or how much US production may increase.

Farmers who practice double cropping often have smaller crops, but two smaller crops would always be much larger than one single crop.

A study released in August by the University of Illinois and Ohio State University found that was certainly the case this year, as high wheat prices led to double-cropped land in southern India. Illinois, bringing an expected return of $251 per acre for wheat and soybeans, which is $81 more than a stand-alone soybean crop. The double crop benefit was less dramatic in other parts of the state and could be less if wheat prices fall.

Mark Lehenbauer, who raises cattle and grows row crops near Palmyra, Mo., said he’s been doing double cropping for years and finds it reliably profitable. Still, he warns there is a multi-year learning curve, as farmers learn to complete the task of planting one crop just as they must harvest another.

And Lehenbauer acknowledged that many farmers may simply be reluctant to take on the added risk or added workload.

“There are a lot of extra steps in there,” Lehenbauer said. “It adds some complexity.”

Ultimately, the main factor that determines whether farmers start growing an extra crop of wheat is the price they can get for the crop, said Pat Westhoff, director of the Food and Agriculture Policy Research Institute. agriculture from the University of Missouri. Although prices fell from highs soon after Russia invaded Ukraine, they remain at the profitable level of nearly $8 a bushel.

“It really depends on how wheat prices move in the future,” he said. “Even with the lower prices we’ve seen, wheat prices are quite high, so there should be a bit more incentive to double-crop wheat next year than there has been. .”

Branding your product in digital spaces