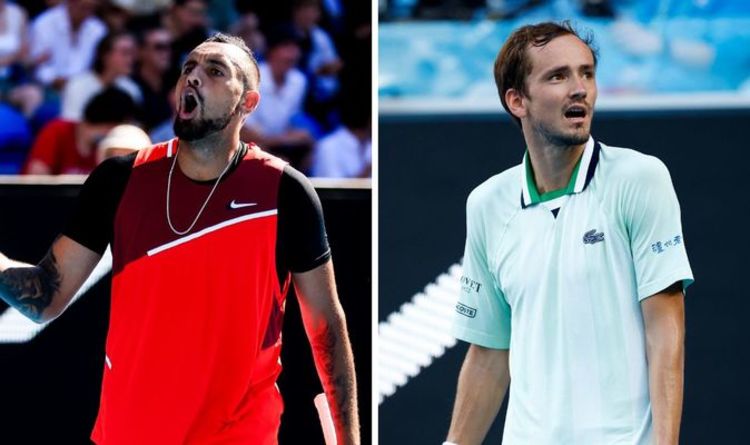 It’s Australia Day Down Under today and Nick Kyrgios and the Aussies continue to make the news at the Australian Open.

New Zealander Michael Venus called Kyrgios ‘absolute k**b’ after clashing in his side’s loss to the Special Ks in the quarter-finals yesterday.

Joe Salisbury could be set to take on the Australian Wildcards in an explosive final on Saturday night – but first they will have to overtake another homegrown duo in the semi-finals tomorrow.

The Kiwi accused Kyrgios of stirring up the crowd in the packed Kia Arena during their quarter-final defeat – and the two exchanged words after the match.

And later, Venus said: “The amount of messages I got from people, an extreme amount, well, way more than ever, but then a lot of messages from people saying how embarrassed they were by the behavior of the crowd and they’re sorry it shouldn’t have been like that.

“They’ll always be his followers and he’ll spin it in a way that helps him, but at the end of the day, he’s an absolute k**b.”

Kyrgios said after the match: “I’ve never had so much fun on a tennis court”

And Kokkinakis added: “It wouldn’t be a doubles match with us if there was no controversy. Everyone seems to have a problem with us.

Special K will play their semi-final match against No. 3 seeds Marcel Granollers and Horacio Zeballos in the Rod Laver Arena tomorrow afternoon local time (not before 3.30am UK time), permit holders pass on the ground being allowed to watch to guarantee another warm atmosphere.

JUST IN: Emma Raducanu said to do three things to ‘win a lot more headlines’

Joe Salisbury may have to do an Australian double to reclaim the title. And he thinks Venus was right to be bored

They now face Matthew Ebden and Max Purcell after the Aussies knocked out No.10 seeds Neal Skupski and Wesley Koolhof 3-6 6-4 7-6 in the Kia Arena.

Speaking of Venus’ reaction, the Londoner said: “Some of the things that are happening, I’ve watched some of them, some of them are borderline. I think it’s great to have a lot of support and that the crowd really get into it and get a little rowdy, but obviously you want them to be player-friendly as well and be that.

“There were times in the game where I wouldn’t have been surprised if they had just stopped playing and said to themselves, ‘If they keep making noise, I’m going to wait for them to go away. stop’. It’s a tough situation. I think you have to have a strong referee to be able to handle this. But it’s tough because you can’t do much unless you start sending off people who do the noise during the points, there’s not much to do. I think it’s good that they put in so much. Sometimes it’s a bit over the top, beyond the line. “

It is the first time since 1985 that two groups of Australian doubles players have qualified for the semi-finals.

Iga Swiatek fought back to beat Kaia Kanepi in a “crazy” quarter-final to set up a semi-final against Danielle Collins.

“That match was crazy,” said the Pole.

She will now face Danielle Collins after the American ended Alize Cornet’s dream run to the last eight 7-5 6-1 wins.

For the first time, the two women’s semi-finals will be played back to back tomorrow night with world No. 1 and home favorite Ash Barty up front against Madison Keys.

World No. 2 gets what he wants with the calendar

The US Open champion complained after his quarter-final victory to play in the Margaret Court Arena.

The Russian said: “I really don’t know what I have to do to play on center courts in a Grand Slam, because I won the last Grand Slam. I am the highest seed here. It’s the same at Wimbledon.

But the No. 2 seed will next face Felix Auger-Aliassime on the main court at 8.30am UK time.