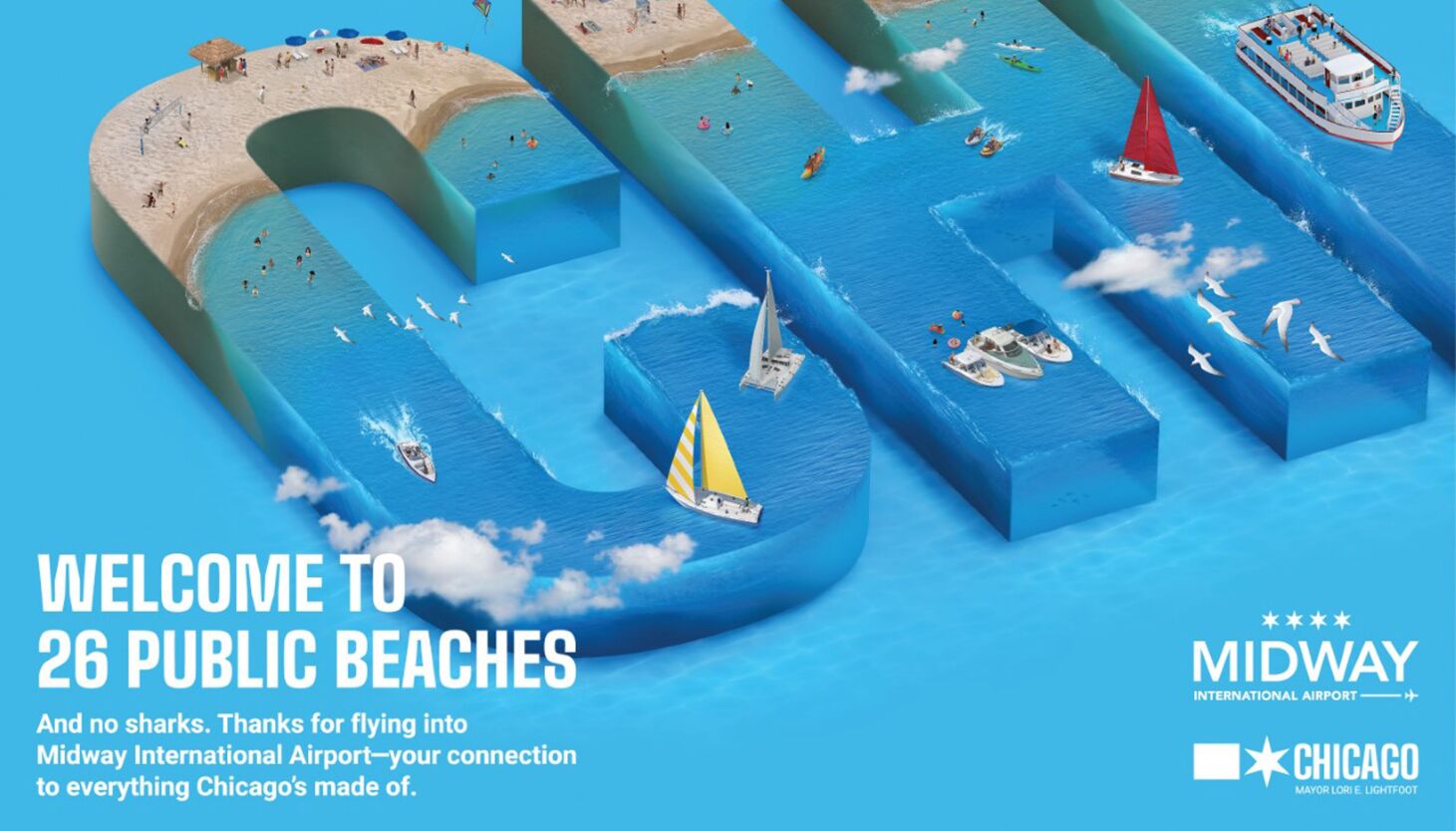 Lightfoot Unveils ‘What We’re Made Of’ Ad Campaign to Welcome Air Travelers to Midway, O’Hare

Mayor Lori Lightfoot’s most recent effort to market Chicago has been downright derided as a money-back-worthy misfire — if only the ad giant who created ‘Chicago Not in Chicago’ hadn’t devised the puzzling tagline. pro bono.

On Monday, Lightfoot unveiled a campaign to “welcome back” tourists and business travelers returning in droves to O’Hare and Midway Airport and encourage them to experience Chicago’s highlights: “26 public beaches and no sharks”; hundreds of public parks; iconic museums; and the “world famous” Chicago hot dog sold at countless stands.

The new campaign will be featured on TV monitors, screens and banners at O’Hare and Midway Airports under a simpler slogan: “What We’re Made Of.”

It was designed by advertising giant FCB Chicago, where Michael Fassnacht, CEO and Chief Marketing Officer of World Business Chicago, previously served as CEO and President.

Neither Fassnacht nor Lightfoot mentioned the “Chicago Not in Chicago” debacle engineered by EnergyBBDO. The idea behind this campaign was to remind people that no matter where you live – New York, London, Tokyo, Berlin or Sao Paulo – you are impacted by what was created and perfected in Chicago.

But they didn’t have to. It was the Terminal 2 elephant.

“What we are made of. It’s the right slogan for our beautiful, diverse and unique Chicago. A city of stories. A city of experiences that simply cannot be found anywhere else on the planet. We are reclaiming and redefining our narrative here,” Lightfoot told reporters.

“One of the central ideas of this campaign is to show visitors that Chicago is more than they heard, imagined and beyond our downtown. So yes, when visitors travel here, they absolutely must go to Navy Pier, our great destination. They should see the Bean, Millennium Park, the breathtaking skydecks of the Willis Tower and the Hancock Building. But they should also want to find out what makes our 77 neighborhoods great – from food and museums to beaches and parks.

Fassnacht defended “Chicago Not in Chicago” as a “smart and cheeky guerrilla marketing campaign” designed to “challenge its perception of Chicago and highlight aspects of the city that many, especially our younger generations, are not aware of.” unaware”.

Meanwhile, he argued, the airport’s “eye-catching” new campaign gives passengers arriving from O’Hare and Midway – visitors and residents – “a sense of the grandeur of our city”.

“They might be like, ‘I have to check this out and I have to spend some money there,'” Fassnacht said.

The first phase includes the lakeside (“26 public beaches… And no sharks”). The second phase will showcase the neighborhood’s arts and culture and Chicago’s 7,000 restaurants.

Phase three remains wide open. Fassnacht encouraged Chicagoans who “feel very passionate about what we should be highlighting” to take to social media to “give us your ideas” well ahead of the scheduled August launch.

At Monday’s press conference, Lightfoot and Aviation Commissioner Jamie Rhee also touted the installation of 70 of the 91 new vending machines planned for O’Hare.

And for those prone to travel-related blood clots, 10 foot massagers are being installed.

Lightfoot said there’s no better time than now to offer a range of 24-hour “contactless” vending machine choices because “Chicago is back.”

In December, passenger traffic jumped 124% at O’Hare and nearly 57% at Midway over the same period a year earlier. O’Hare also “leads the nation in total trade value for January 2022” with $27.2 billion in goods “moving through this airport alone.”

Lightfoot noted an “incredible resurgence” in leisure travel, but added: “Businesses, you need to start traveling again. We welcome you. We will treat you like kings and queens. But come back. Send your friends to the road, because business travel obviously has to come back at the same rate we see leisure travel coming back.