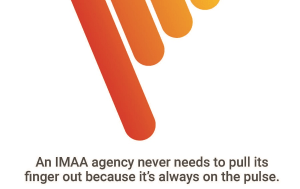 Industry body Independent Media Agencies of Australia (IMAA) has launched its own multi-channel advertising campaign to promote the benefits of independent media agencies.

The campaign will air on radio, television, billboards, digital and print channels, with media contributing more than $ 2 million in advertising support.

â€œWe all have an agile mindset towards the media; we have close relationships with the country’s largest media owners, and we solve all of our clients’ biggest problems by always bringing older people to the table.

“This campaign seeks to sum that up and asks potential clients to make sure they have an independent media option on the list when looking for a new media agency.”

Visual assets feature elements of the association logo transformed to represent the letter A, as independent agencies “always bring their A team to the table”, a finger because “it’s always the pulse”, a graphic because that they â€œwant results as much as you doâ€ and two hands to show that the only agenda for an IMAA agency is â€œthe meetingâ€.

“This campaign aims to promote the consolidated expertise and leadership that our members can offer, and to put indies at the forefront for companies looking to work with an elite group of advertising specialists.”

The campaign will run for eight weeks nationwide.

Do you have something to say about this? Share your views in the comments section below. Or if you have any news or information, drop us a line at [email protected]