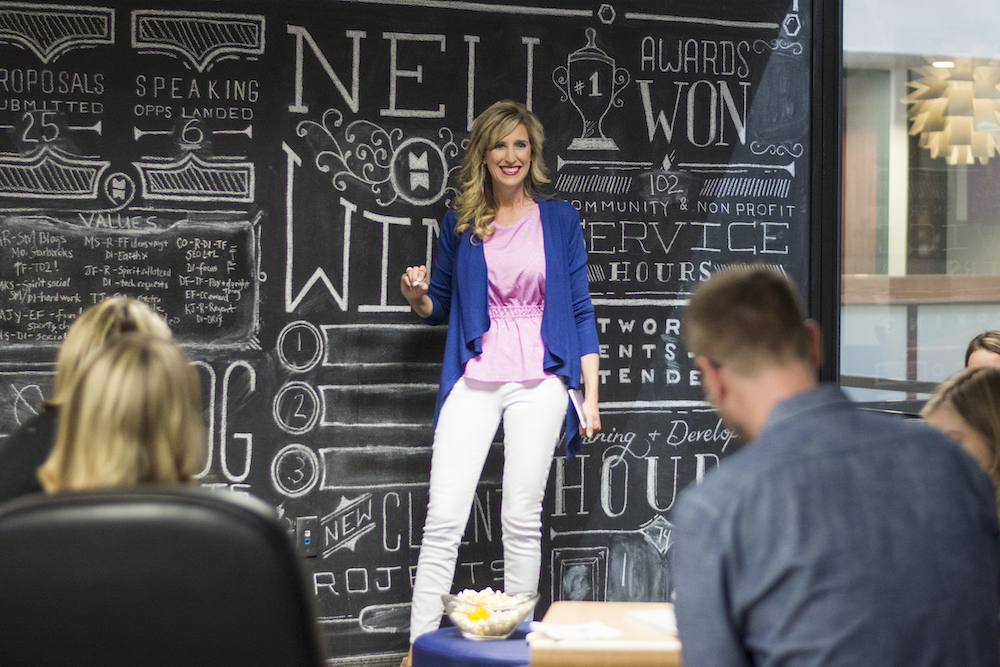 The breakfast crowd buzzed as I joined Tina Young at a bright orange table at Snooze in Addison. Amid the pandemic, the Marketwave founder and CEO often sat and worked on the restaurant’s patio, she tells me, just to get away from it all. In addition to its funky 1970s decor, the restaurant chain is known for its inventive breakfast treats, like pineapple upside-down cake pancakes and Funky Monkey French toast. Young bypasses those options and instead orders a three-egg scramble with spinach, mushrooms and avocado, also adding bacon to it at the last minute.

A native Texan who grew up in Plano, she studied journalism at the University of North Texas and majored in marketing. When an advertising agency executive was a guest speaker in one of his classes, Young boldly walked to the front of the lecture hall and asked him for an internship. She ended up developing an internship program for the company, making herself the first participant. This led to editorial work with the agency after completing his studies.

Young’s real interest, however, was in long-form writing and brand development. So, two years later, she joined Edelman, where she worked on the Texas Instruments account. “Terri West, who recently retired from TI, is now chair of the advisory board of the UNT Mayborn School of Journalism, and I am its president-elect,” says Young. “It’s a full-loop moment. She was literally my first client.

From Edelman, Young launched the Dallas office of GTT Communications, discovering a knack for business development through the agency’s “eat what you kill” business model. More quickly, she became a partner in the company after achieving certain sales targets. A year later, Edelman bought out GTT. She used her share of the proceeds from the sale to launch Marketwave in 1998.

“I knew it was my shot, having the capital to go ahead and open the doors,” Young says. “There were things I had seen in other people’s agencies that I thought I could do differently — better — with the right team.” The company’s services revolve around branding, public relations and employee engagement. And today, 24 years later, what started as a one-woman shop now has 13 employees and a client list that includes Oncor, Pacific Builders, Endeavor Energy Resources and Ulterra.

An early disciple of the Conscious Capitalism movement (Young helped found the Conscious Capitalism Dallas Chapter), she runs her business by focusing on the philosophy’s four core tenets: Purpose, Stakeholder, Culture, and Leadership. It’s also the core of a relatively new service offering, which helps companies examine not just their external branding, but also their internal branding.

“Externally, I’ve always done what’s called customer journey mapping, where you look for touchpoints and go-to-market opportunities,” Young says. “Well, there’s also employee mapping. It starts with recruiting, then hiring and onboarding, and many companies stop there. But if you don’t have important touchpoints beyond that, your retention won’t be good.

There’s a strong business case for paying close attention to internal communications, she says, especially given current labor market conditions. “There is incredible data on the cost of losing a good employee,” says Young. “If you can prevent some of that and if you can help someone see a long-term path in your business, you win.”

Stay up to date with DFW’s rapidly changing business community with weekly features, interviews and news.

Christine is the editor-in-chief of CEO magazine and its online platforms. She is a nationally award-winning business journalist who has…