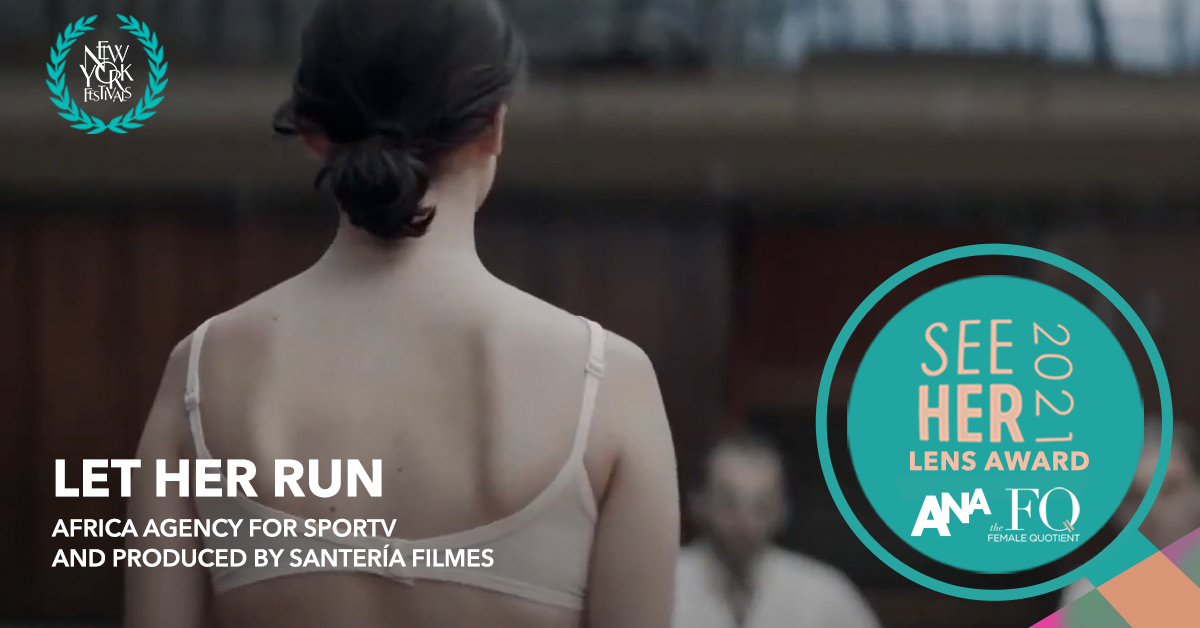 New York Festivals International Advertising AwardÂ® announced the winner of the first SeeHer Lens Award, a new award that honors the best in-class creative cinematographic work submitted to the 2021 competition that exemplifies gender equality and specific portrayals of women and girls in advertising.

The SeeHer Lens Award is a partnership between NYF, The female quotient (La FQ), and the ANA. This award sets the standards for creative media, celebrates advertisers who drive change through the accurate portrayal of women and girls, and brings visibility to content committed to the ideals of the SeeHer movement.

â€œWe are inspired by entries from around the world and it is clear that we are becoming a more conscious creative community. The creation ‘Let Her Run’ powerfully amplifies SeeHer’s mission around the need for more accurate representation of women and girls in advertising and entertainment, including sport, â€said Shelley Zalis, CEO of The Female Quotient , co-founder of SeeHer. “By sharing these messages globally, together we will create change.”

“,” We are so proud to be a part of this festival, this new award and to use this platform to share the important message for equality through great storytelling in advertising. Â»Indicative

The inaugural SeeHer Lens 2021 winner â€œLet Her Runâ€ is a compelling film created by Africa and produced by SanterÃ­a Filmes for SporTV to draw attention to the unfair and damaging restrictions imposed on women by sports federations. The winning entry illustrates the dramatic real-life sex tests in the ’60s, known as’ nude parades’, that many female athletes went through to prove they really were women.

As of May 2019, World Athletics, ex-IAAF, had set new limits for testosterone levels in female athletes. A hormone produced naturally by both men and women. They lowered the limits from 10 nmol / L to 5 nmol / L. IAAF officials had decided that many women no longer qualified as female athletes. And that these girls should take medicine to compete. Sex testing has had many faces since the 1930s, and it continues to cause psychological damage to girls who just want to run.

â€œWe have a great responsibility to drive the change. To inspire people. Equality is not inevitable, but the result of hard, tireless and fearless work. This award is another step towards a better and equal world for which we must all fight. â€â€”Nicholas Bergantin, Creative Director, Africa

â€œIt is such an honor to be presented at the very first edition of the SeeHer Lens Award. We really hope that this award will bring the necessary changes to our company and our industry â€, celebrates Felipe Luchi, partner of the film production company SanterÃ­a Filmes.

â€œIt’s no longer enough to just create an ad; we have to create the change. As a perception-shaping industry, we have a responsibility to take an active role in making the world a better and more equal place for women. Thank you to the SeeHer Lens initiative for fueling this long overdue change in the way women are portrayed in advertisements, â€Mona Hassanie, SeeHer Grand Jury Member, Chief Strategy Officer, Wunderman UAE.

â€œThe NYF See Her Lens Award has shown us what usually goes unnoticed. And our role as creatives should be to balance that equation and get more representation of women in ads. â€â€”Marc Storino, Senior Creative Creative Director, Havas London

For more information on competition categories, rules and regulations, click on: HERE.

Entries for each of the competitions are judged worldwide by panels of peers in their respective industries. For more information, visit www.newyorkfestivals.com.

About the female quotient
(La FQ) is dedicated to promoting equality in the world. The FQ provides businesses and business leaders with the research, tools and experiences to create fair workplaces. With top-notch programming and content, it fosters powerful conversations around DE&I. The FQ-turned-movement destination, the Equality LoungeÂ®, has become a catalyst for change at major industry events and conferences around the world, including the World Economic Forum (Davos), Consumer Electronics Show (CES) and Cannes Lions, creating a global stage for connecting and uplifting women. Through his enterprise of equalityÂ®, the FQ offers a suite of targeted tools and solutions to help executives bridge the gender, policy and pipeline gaps. For more information, visit www.thefemalequotient.com.

About SeeHer
Despite advances in recent years in accurately portraying women and girls in media, unconscious biases persist in advertising and entertainment. The average age, race, body type and other aspects of women portrayed in today’s media still represent only a small fraction of the female population. Led by the Association of National Advertisers (ANA), SeeHer is a collective of marketers, media organizations and industry influencers committed to advertising and supporting content that features women and men. girls as they really are. It was launched in June 2016 in partnership with The Female Quotient (The FQ) in Washington DC in the United States of women. To help marketers measure success, the group developed Gender Equality MeasureÂ® (GEMÂ®), the first research methodology that quantifies gender bias in ads and programs. GEMÂ® shows that content that accurately describes women dramatically increases both purchase intent and brand reputation. In 2017, GEMÂ® won the prestigious ESOMAR award for research efficiency. The methodology quickly became the industry standard, which led to a global rollout in 2018. In 2019, the movement expanded into new verticals: sports (SeeHer In Sports) and music (SeeHer Hear Her). Visit SeeHer.com and follow @SeeHerOfficial on Facebook, Instagram and Twitter.

How Contraceptive Brands Are Increasing Online Advertising Since SCOTUS Overturned…

These stocks are best positioned to weather an advertising recession