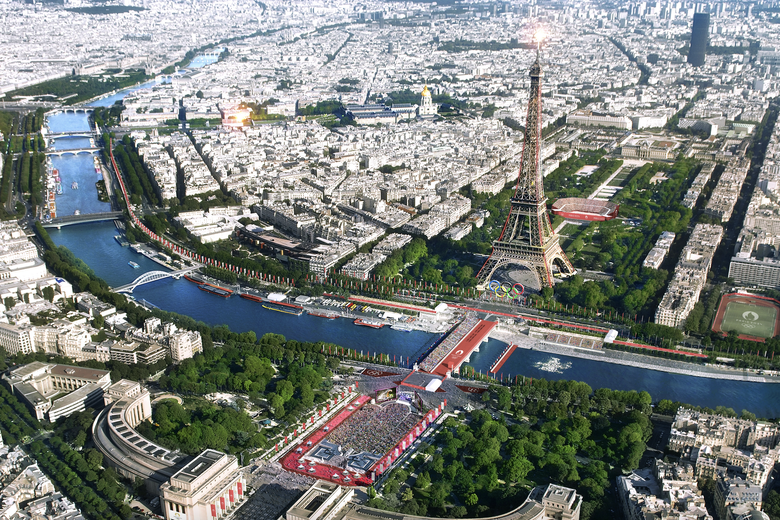 The Paris 2024 Olympic Games will be the Cheapo Games.

The Olympics are on a diet. After decades of host cities crammed with expensive and unnecessary velodromes and shooting ranges, the International Olympic Committee has relaxed its demands, not out of magnanimity, of course, but because cities have stopped bidding. The new focus is on temporary structures and adaptability, and the test is underway in Paris, which is expected to host the 2024 Games.

Instead of an isolated and paid Olympic park welcoming journalists, athletes and stadiums, the Paris Games will be spread throughout the city and its suburbs. Instead of a dozen brand-new stadiums, Paris is only building a handful, relying for the rest on temporary or older buildings. The most important stadium, the Stade de France, will be over 25 years old; much of the competition will take place through ad hoc structures scattered around the heart of the city. Fencing at the Grand Palais, horse riding at the Palace of Versailles, breakdance at Place de la Concorde (yes, there will be a gold medal for b-boys and -girls in 2024), wrestling in front of the Eiffel Tower. And an opening ceremony on the Seine. The event will be hard to miss for Parisians, for better or for worse.

What about the cost? For the first time, the construction budget (3.35 billion euros) is lower than the budget for the event itself (3.9 billion euros). That would make the 2024 Games significantly cheaper than the Games in London, Sochi, Rio or Tokyo – the current competition, according to Japanese listeners, could reach more than $ 20 billion. (Of course, there’s still plenty of time to blow up the Paris budget.)

Most of the investment is intended for Seine-Saint-Denis, the department of the northern and eastern suburbs of Paris, which is the poorest in the country. Citizen redistribution? Easy development sites in a crowded city? Why not the two of them? Organizers believe that placing the Games’ center of gravity in the north is divested suburb will not only provide jobs, but also a sense of pride and belonging to a part of the metropolis which is generally shunned by Parisians inside the ring road. It might just be the Olympics to feel good. In December, a Harris poll found 84% of the French were in favor.

“We wanted to strengthen the links between Paris and Seine-Saint-Denis, and ensure that Seine-Saint-Denis benefits from it,” explains Patricia Pelloux, who co-directs the urbanist think tank APUR and sat on the committee of acquisition of the Games for Paris. “It’s an area that has had problems, but there is a lot of energy there”,

The Olympic village will be located in Saint-Denis, on industrial wastelands along the Seine. Subsequently, the dormitories will be converted into nearly 3,000 apartments. The proof of concept, says Pelloux, is a few kilometers away in Clichy-Batignolles, the dream site for the Paris 2012 Olympics. London won the tender, but Paris has built a huge new district anyway. on the old marshalling yards. It settles well.

The 2024 Olympic Village is 800 meters from the Stade de France and the new Olympic swimming pool, the first of its size to be built in Paris since the 1924 Games, and a future community benefit. One in two sixth-grade students in Seine Saint-Denis cannot swim.

Ambre Abittan, high school student and passionate tennis player, has lived here in Saint-Denis since her childhood. “It’s not known as a good city,” she told me. “And the Olympics will give us a better image. You tell people that you are from here, they are very reluctant. It’s the suburb. “It’s a shortcut for hopeless housing projects and the occasional riots.

In London and Rio de Janeiro, Olympic investments have been criticized as a workhorse for gentrification. It is also a long-standing concern in Seine-Saint-Denis. But the bigger concern is that the powers that be are already reducing or delaying their most important promises as deadlines approach and money runs out. Volleyball left the department in December; a training pool was canceled in March.

The most disappointing news was the delay of three promised suburban metro lines, the 15th, 16th and 17th, which reportedly met at a new station adjacent to the Olympic Village. Instead, a new metro extension, Line 14, will reach the site in time for the competition. Unlike the 15, 16 and 17, which will one day link the new Olympic activity hub to the rest of the Seine Saint-Denis, the 14 runs straight south to the center of Paris.

These missing links may not matter much to athletes from neighboring dormitories or spectators coming from Parisian hotels, but their absence will hurt people in the suburbs who work or attend the Games, and belies the message on the banner outside the Olympic village: “Saint-Denis, the Games are ours! By public transport, whose organizers expect to bring everyone to the competition, the Olympic pole of Saint-Saint-Denis will be more accessible from central Paris than from many neighboring suburbs.

To get from the Olympic Village to a nearby Olympic training pool being built a few kilometers east in Aubervilliers, for example, it would have taken two stops on line 15. Instead, it requires a 40-minute jerky bus ride, on the canal. and under the train tracks, in the narrow shopping streets lined with bakeries, kebabs, pharmacies, discount supermarkets and clothing stores selling saris, waxes and costumes.

Proof of the modesty of the impact of Paris 2024 on Paris, three years from the arrival, this training pool is the most controversial project underway. That’s because it would move around 20 plots to the local community garden, which provided space to plant and relax for generations of neighbors. They come in and out with rolling grocery bags stuffed with tomatoes and lettuce heads. As with many community gardens, advocates argue that it is a valuable asset to the neighborhood, so much so that it has, for the first time, opened its doors to the general public.

A gang of young squatters from across the country have settled here, treading barefoot over stones and crushed fruit to a camp nestled in the shade of barricades of straw and mud. The bulldozers are gathered on the other side. “The concrete is not going to feed us,” said one of the resistance fighters. “Less concrete, more melons! (In French, it rhymes.) No to gentrification, no to the Olympic Games, no to the new metro line.

At the nearby Café Casanova, I heard a different opinion from Karim Ben Amira, a father of four who has lived in the neighborhood for a dozen years. “We would love to have something for the kids,” he said of the new training pool. He would like his children to have a place to swim. “Look around you. There is nothing here, a cafe, a soccer field. It will make the neighborhood come alive, despite what is happening to the allotment gardens. You cannot satisfy everyone.